And the crowd went wild... 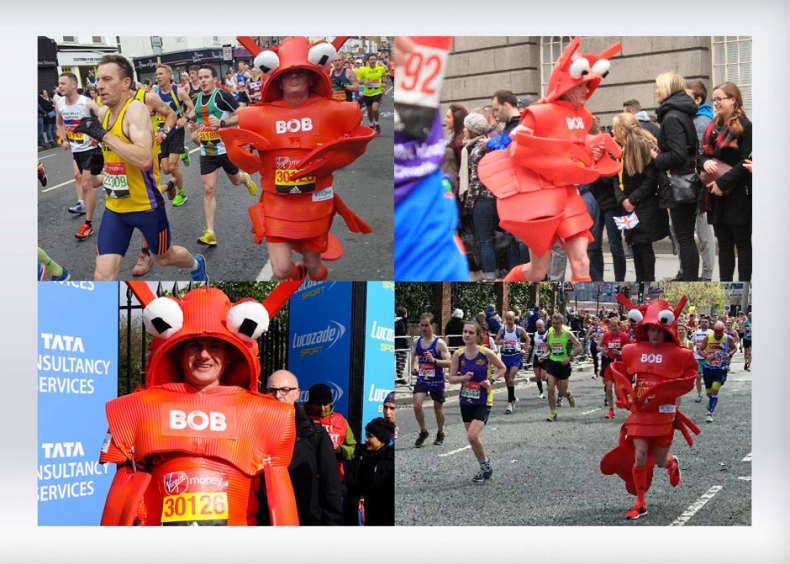 An impressive 3 hours, 23 minutes and 56 seconds... That's how long it took our Creative Director, Simon Couchman, to run this year's London Marathon dressed as none other than Bob the Lobster.

And, although our marathon man might have been pipped at the post in his quest to be the world record holder, the crowd loved him!

Simon said: "I may not have got the record, but I raised almost £800 for the National Eczema Society.

"I really am gutted I couldn't bring home the goods but the outfit slowed me too much, even though it looked super cool and I had three hours of none stop chanting 'Bob, Bob, Bob'!"

Simon's lobster outfit made an incredible spectacle - made out of yoga mats, he cut a crustacean dash through the runners that caught the imagination of everyone who saw him.

He was featured on the BBC and interviewed by the AOL news channel. The story was also widely covered in the North West press as well as The Guardian. There was some great engagement on Twitter including lots of conversation about being a 'nippy' runner as well as 'pans of boiling water and lemon butter'!

As word spread that Simon was running his 28th marathon dressed as a lobster, he was warmly congratulated by fellow runners including ICG client Ian Jones, Managing Director of Warrant Group, who was running the London Marathon for the first time.

Ian said: "I saw Simon on the TV running at the finish, what a superstar he is, very impressed."

Simon added: "I would like to thank everyone for all the support and donations for such a great cause. There's always the next one even though I promised myself I was done with marathons!"
Our People Play