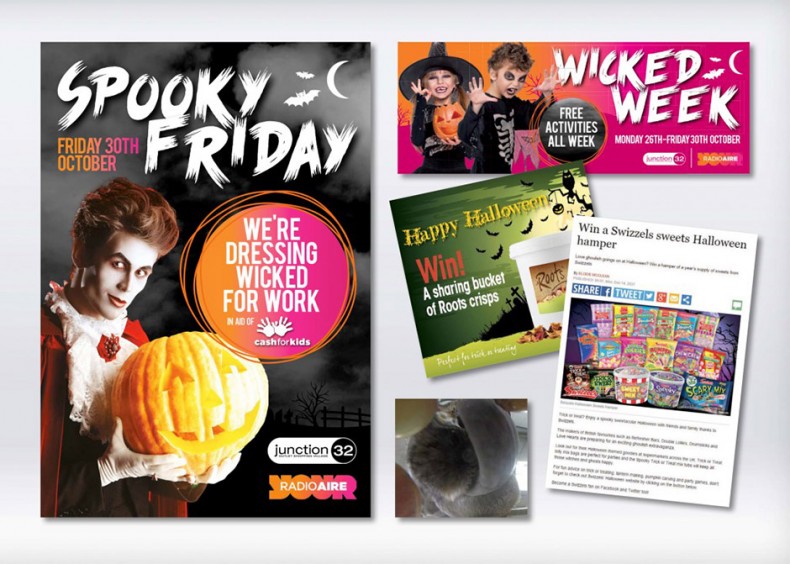 Halloween is always a spooktacular event at ICG and this year is no exception. Forget last minute plans, Halloween has been an event in the making for months now with ICG working on everything from competitions and e-marketing campaigns to press releases and design collateral.

ICG clients certainly like to get in the spirit of Halloween with shopping outlet Junction 32 launching a 'Wicked Week' of events. The design team created a suite of promotional collateral including roadside banners, large posters as well as social media graphics and an e-marketing campaign.

Makers of British favourites such as Refresher Bars, Drumsticks and Love Hearts, Swizzels also got in on the Halloween action when the PR team was quick to spot an opportunity for product giveaways in three national online publications.

Five hampers of a year's supply of Swizzels sweets, including the Halloween bumper packs, were given away on OK Magazine, the Daily Express and the Daily Star attracting more than 8,000 entries.

If all those Halloween shenanigans weren't enough, PR client Blackpool Zoo filmed some of their residents taking part in the traditional Halloween party game, apple bobbing all captured on film using a GoPro camera.

The footage was amazing so the PR team wasted no time in sending it out to local, regional and national press to let the world see the results.

Taste of success for Roots

The results of the campaign speak for themselves with almost 1000 people entering on Twitter and over 500 entries on Facebook.

Out of this world PR for The Mall Blackburn

The PR team worked with The Mall Blackburn to promote its 'out of this world' sci-fi event, pulling together press releases and social media posts for both Twitter and Facebook.

The event, taking place over the Halloween weekend, gained coverage in key regional titles including The Lancashire Telegraph and Blackburn BID as well as being featured on sci-fi fan sites across the UK.

When it comes to trick or treats, ICG always goes for the treats. Check out what goodies we've been tucking into this week on our Twitter and Facebook pages!