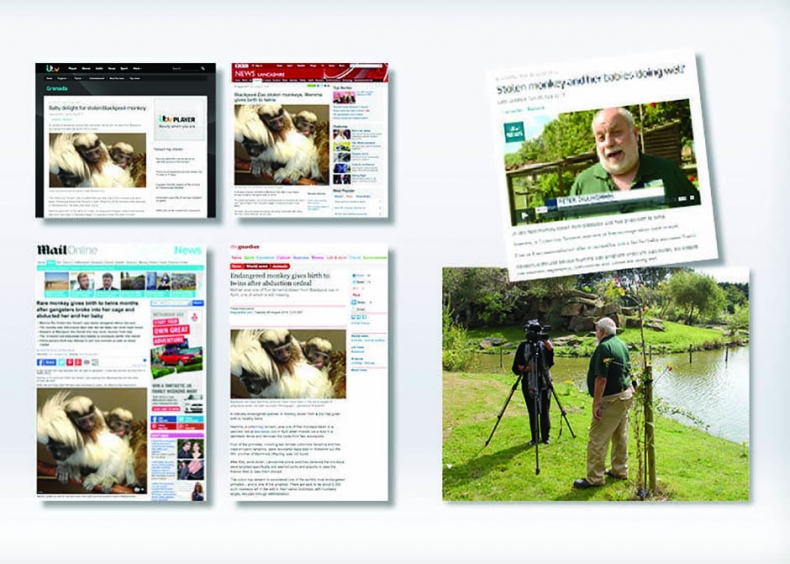 Everyone loves a happy ending here at ICG so when our PR department heard about two very special babies that had been born at Blackpool Zoo, they didn't monkey around in letting the world's media know.

The story started in April when five endangered monkeys, three Cotton-top Tamarins and two Emperor Tamarins, were stolen during a break in at Blackpool Zoo.

The ICG team received notification shortly after keepers made the distressing discovery and they worked closely with police to produce a full media statement and plan.

Within 24 hours over £3million worth of PR coverage had been achieved and the widespread media attention and police investigations led to four of the five monkeys being discovered in Yorkshire shortly after the appeal was released.

Saturday morning was another flurry of activity and by the end of the weekend PR value of coverage had more than doubled.

Much to everyone's dismay, the fifth monkey has never been found and although four had been returned there was still a tinge of sadness, especially for the mother of the missing baby Cotton-top Tamarin, Mamma.

There is a happy ending to the story though as Mamma gave birth to healthy twins in August!

ICG helped to spread the word of the new arrivals, with coverage making national and international headlines.

We are looking forward to seeing the twins grow up and will be keeping the press informed of their progress over the coming months and years.