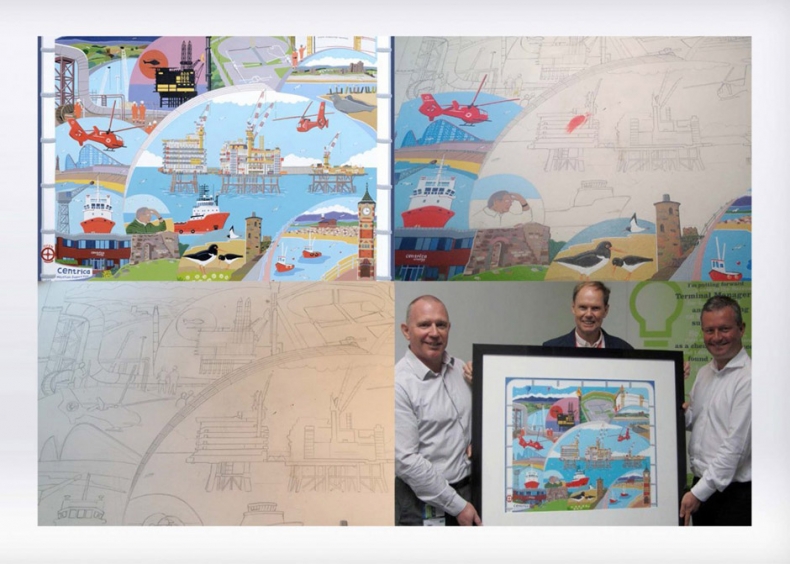 When Centrica Energy was looking for ideas to celebrate 30 years of gas production from Morecambe Bay, we couldn't resist the idea of a Chas Jacobs commission. And, so it turns out, neither could the team at Centrica Energy.

The story of 30 years of gas production from the North West has been vividly brought to life by the Lancaster artist who is widely known for his use of bold, bright, primary colours.

ICG worked closely with Chas and Centrica Energy's team at the Heysham Support Base to capture all elements of the gas processing operations which have played an invaluable role in heating and powering UK homes since 1985 to the present day.

The painting is made from acrylics and is packed with fascinating detail. The offshore platform is the central focus alongside the Barrow Gas Terminals and the Heysham Support Base.

Chas Jacobs, whose work has attracted collectors from all over the world, said it was an exciting project to work on.

"I've really enjoyed sharing this incredible story especially within the dramatic seascapes, coastlines, local landmarks and wildlife of Lancashire and Cumbria. For those who have been part of this 30 year story, I hope my work celebrates their achievements, " said Chas.

Gas formed in rocks lying deep beneath the Irish Sea was extracted, processed and piped into the National Grid for the first time on January 9th 1985. Today it continues to heat around 1.5 million homes.

The story was widely featured across the regional media with in-depth pieces on BBC North West, BBC Radio Lancashire, BBC Radio Cumbria, ITV as well as the North West Evening Mail and the Lancashire Evening Post.

Our Work Design Our Clients