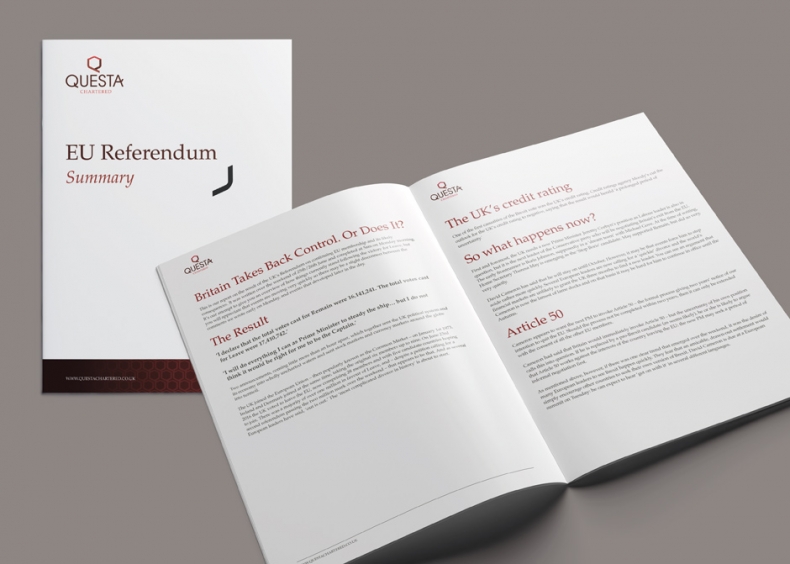 With the country's spotlight on Brexit, ICG supported Questa Chartered on providing useful and meaningful insight on the debate to the financial planning firm's client base.

After discussions with the team at Questa, it became clear that many of their clients were undecided on which way to vote. This gave the ICG team the idea to provide them with helpful information from both sides of the argument in the run up to the 23rd June.

Ahead of the vote, ICG dedicated Questa's May e-newsletter to the EU referendum. This included a report branded up by the ICG design team with important information on what leaving the EU could mean for the country. ICG's PR team also put together an interesting Q&A piece for the newsletter with the views of one of Questa Chartered's experienced Senior Financial Planners and what he thought the vote could mean for people's finances.

Three days before the vote, ICG re-issued the report in a short e-shot titled 'Remain or leave? Still not decided?' which gave subscribers the chance to take another look at the information before deciding.

When the referendum results were in, ICG distributed a post Brexit report outlining the key events and what it could mean for sterling, jobs and the UK markets.

All of the material included strong branding, messaging and imagery, which helped create a great response, with high open rates and a large number of click throughs. This boosted traffic to Questa's website and linked readers to content on their news pages.

The PR team will be looking at the next big events on the horizon, including the American presidential election where candidates Trump and Clinton will go head to head for leadership this November.