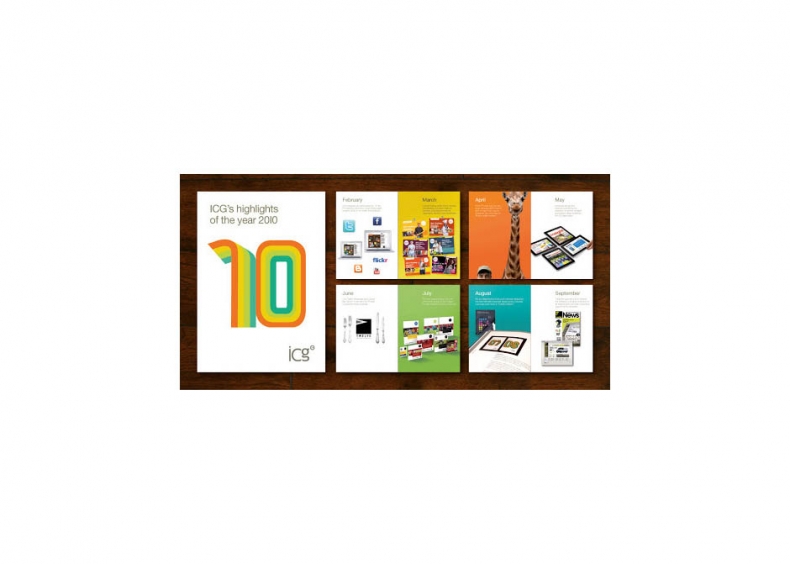 It's been a fantastic year at ICG and the whole team has worked with new and existing clients throughout 2010 to uncover creative ways to be seen and heard!To mark some of the milestones, we have produced the fourth edition of our Highlights of the Year brochure – a snapshot of activity for 2010 which is available to download at www.icgonline.co.uk.January sets the scene for long standing client Yorkshire Copper Tube and its 60th anniversary celebrations. From branded lolly pops to interactive CD Roms and an eye-catching new exhibition stand, we worked hard to make the company shine.February saw the launch of ICG’s new website and social media profiles on Twitter, Flickr, Issuu and Facebook.A month later, we ‘March-ed’ ahead after Central Training tasked ICG to develop all its marketing and PR activities before having the first and last laugh on April Fool’s Day when GMTV filmed Blackpool Zoo’s spoof recruitment drive!May was a busy month for our digital team as they worked on a number of electronic publishing briefs and June saw chic Twelve Restaurant & Lounge Bar ‘book’ in with our PR team to generate media coverage.The new football season kicked off with a fresh design for League Football Education’s suite of literature and in August we were delighted to learn that our work had been featured in two internationally respected design books, including a six-page case study in ‘Portfolio Matters’.Another new client win was confirmed in September as Freightlink appointed us to create new branding for its website as well as launch an inaugural newsletter in both English and Polish.The newsletter theme carried on into October as we created a raft of print and digital designs for clients.In November we created a new visual identity for client Enterprise, which included the production of in-depth branding guidelines.We rounded off the year with a festive feast of Christmas cards and calendars and said a great big thank you to our customers with a pair of striped ICG gloves in our spicy corporate colours.We would love you to be one of our 2011 highlights. For more information please call Peter or Denise on 01772 679 383.