ICG's asthmanaut is 'over the moon' with new world record! 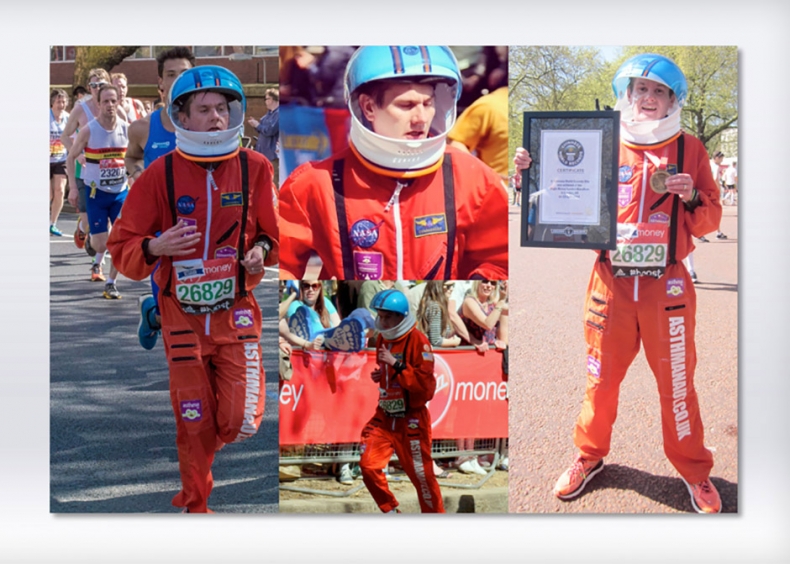 ICG's creative director is officially a world record holder after achieving the fastest time for completing the London Marathon while dressed as an astronaut.

Simon finished 2,153 out of the 33,613 runners who finished the race - which ranks him in the top six per cent of runners.

Wife Jennifer and daughter Genevieve were there to welcome Simon across the finish line and Guinness World Record officials presented him with a certificate and a medal to commemorate his outstanding achievement.

Dubbed the 'asthmanaut,' Simon pounded the streets of London dressed head-to-toe in a bright orange astronaut costume, helmet included, and his mission raised over £1,500 for Asthma UK.

Simon chose to support the charity after suffering with the condition all his life. It was so severe that in his younger days he wasn't able to take part in any sports in school or run for any distance.

"I'm absolutely thrilled that not only did I break the world record by eleven minutes, I've raised vital funds for a charity which is very close to my heart," said Simon.

"Although it was a perfect day weather wise, I did start to feel the heat in the costume a couple of hours in to the race, but hearing the crowds chant 'Space Man' certainly boosted morale and spurred me on.

"Surprisingly I don't feel too tired - I think I'm still running on the adrenaline of it all. I've promised Jennifer I'll hang my trainers up for a while - that'll give me time to think about my next running challenge!"

If you would still like to make a donation, please visit: virginmoneygiving.com/SimonCouchman.